Everyone loves their sleep, right? There aren’t many things better in life than slipping into bed after a long day, snuggling up under the covers, and drifting off to dreamland. Most people use a blanket of some sort to cover them as they sleep, usually a comforter. But, if you don’t already have one, a duvet may be a worthwhile investment to add to your sleeping arrangement.

Definition of a Duvet

What is a duvet? Duvets are a type of bedding that is essentially a soft, flat bag filled with down, feathers, wool, or a synthetic alternative. They differ from bed comforters because they are protected with a removable cover, called a duvet cover.

When looking up the duvet definition, you’ll also find that the duvet set originated in Europe and was made from down feathers, which acted as a thermal insulator. Just as a blanket or comforter would, the duvet covers you to keep you warm as you rest. 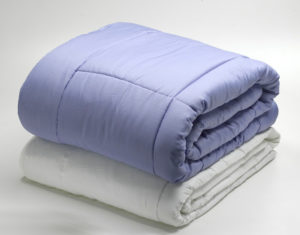 When it comes to a duvet vs. a comforter, the line of the definition has become a bit blurred. That’s because both terms are used interchangeably. However, they do have their differences.

Duvets tend to be warm but more lightweight than comforters. A duvet set typically includes a duvet insert, which may be filled with down or other materials, such as wool, feathers, or synthetic alternatives. And what is a duvet cover? The duvet cover also makes it easier to change bedding looks and styles, and you’ll just need to wash the cover regularly.

Some say duvets tend to be fluffier than comforters, which tend to be flatter. Duvets are also typically white since they are masked with a duvet cover. When it comes to comforter vs. duvet, another differentiator is that a comforter covers you as you sleep, but it on its own does not have a protective cover.

Because comforters lack that protective cover, they do require regular washing. Comforters are the better choice for someone who does not plan to change the look or style of their bedding often, as a comforter is a simple, one-and-done option. That’s because the comforter itself is made from decorative fabrics, while the duvet is an insert that is covered with removable decorative fabric.

Why Use a Duvet? 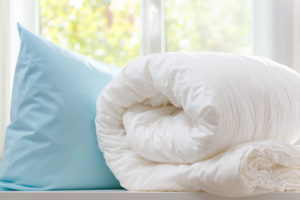 A duvet is an excellent option for someone who wants warm and lightweight covers. Because a comforter tends to be flatter, the user may need to supplement their bedtime arrangements with additional blankets during colder weather. The duvet tends to be fluffier and sometimes is better at retaining heat.

Another reason to use a duvet is the ease of changing up your bedroom’s look and style. Because of the interchangeable covers, it’s easy to simply pick and place a new cover on your duvet insert when you’re ready for a change. If you are someone who likes to switch up decor and bedding, a duvet is the better choice for you.

Where to Get Duvets and Covers

Try a down alternative duvet from Peacock Alley or a down duvet insert from Boll & Branch. Both are made from extremely high-quality materials, virtually guaranteeing comfort and a good night’s sleep. For duvet covers and sets, Boll & Branch sells a variety, including this colorblock duvet set, which includes a duvet cover for a queen — or full, king or California king-size bed, along with standard or king-sized shams.

How to Care for Your Duvet

Caring for your duvet is actually quite simple. Just as with your other bedding and even pillows, a duvet can be hand washed or even machine washed. Firstly, a duvet does not need to be washed often, due to the duvet cover’s role of keeping it covered and clean.

If you spill something on your duvet, you can spot treat the area with a bucket of warm, soapy water. However, your duvet insert will need a good wash every now and then, regardless. Granny Goose recommends following these steps, according to the material your duvet is filled with, to wash your duvet properly.

All Down or Down & Feather Fills

Whether you’re team comforter or team duvet, each has its benefits. Take your personal style, preferences, and bedding needs into account before deciding which type of bedding cover to purchase. Duvets will offer more flexibility in the department of easy cleaning and change in styles, while comforters provide a simpler, one-and-done approach to both decoration and bedding.