Have you ever felt unusually sleepy after a big holiday meal? Maybe you find yourself wanting to take a nap after a long Thanksgiving dinner or a lingering brunch. It’s natural to sometimes feel tired after a large and satisfying meal. However, if you are overwhelmingly tired after eating every meal, or feeling sleepy after eating certain foods, then there are some adjustments you can make to get your energy back to normal. 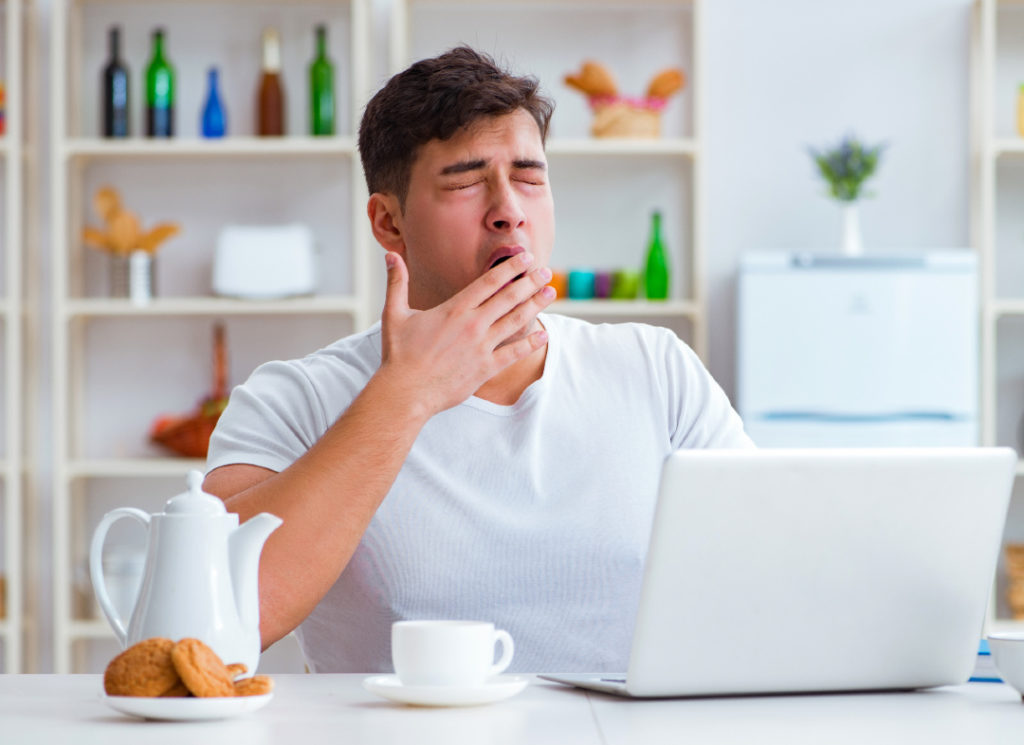 Why Do I Fall Asleep After Eating?

Some scientists think that postprandial somnolence is caused by the reaction of amino acids like tryptophan, which can be found in many protein-rich foods, being absorbed into the body alongside carbohydrates and producing more serotonin. Serotonin receptors communicate to your body when it should sleep and when it should be awake. In addition to playing a role in your sleep cycle, serotonin also helps regulate your mood.

Some foods particularly high in tryptophan include:

Having any of these foods in large portions, particularly with carbohydrate-rich foods that will be better absorbed in the body, can naturally cause extreme fatigue after eating.

However, not only foods high in tryptophan but also other foods can induce overwhelming tiredness after eating them. Sugar is the main offender. Even though sugar is commonly thought to produce a “rush” or “sugar high,” it’s usually quickly accompanied by a blood sugar crash. For some people, the crash of eating sugar overwhelms the rush, making them feel sleepy almost immediately after consumption. The cycle of a sugar high to sugar crash can be addictive, with some studies showing it to be as powerful an addiction as cocaine.

High sugar consumption limits the production of the brain chemical orexin, which creates feelings of awakeness and alertness. Ultimately, a sugar crash can not only make you feel sleepy, but it can also inhibit your ability to get restful sleep. This is caused by fluctuations in your body’s orexin and serotonin levels that confuse the body’s natural sleep cycle.

Why Do I Get Cold After I Eat?

Both the temperature of certain foods and increased blood flow towards the digestive system after eating can make you feel cold. Eating cold foods like ice cream naturally makes you feel colder. Additionally, eating immediately after physical activity can make you feel cold because of the blood flow away from the skin towards the digestive system. This change in your body’s temperature can help contribute to postprandial somnolence, making you want to crawl under the covers and nap.

While feeling tired after eating a big meal is usually normal, you may want to speak with a doctor if you find yourself getting inexplicably tired every day around the same time, usually after lunch. This can be one of the insulin resistance symptoms, where your body doesn’t process carbohydrates and sugars correctly.

Insulin resistance, when left unchecked for long periods, often leads to type 2 diabetes. One of the common warning signs is excessive tiredness after eating. Insulin resistance also makes it very difficult to lose weight, as insulin helps your body store glucose. When insulin malfunctions, the body will store glucose outside of cells, as fat.

How to Stop Feeling Tired After Eating

If your feelings of tiredness after eating are not due to diabetes or insulin resistance, then there are certain steps you can take on your own to navigate falling asleep after eating.  Choosing to eat certain foods at certain times of day can help teach your body how to stop being tired when you need it to be alert, and can also help you relax before bedtime.

Portion control is one reliable way to manage feeling like you might fall asleep after eating. Eating smaller, but more frequent meals can help combat feelings of sleepiness, particularly after lunchtime. Try eating four to five smaller meals throughout the day instead of three large ones.

Additionally, consider the quality of nutrition that your food offers. Studies have shown the correlation between when you eat and what you eat, and your body’s sleep patterns. Eating a diet high in carbohydrates and sugars has been found to cause sleepiness throughout the day, while also interrupting the body’s REM cycle and making it harder to awaken refreshed.

Food and the Sleep Cycle

Knowing that certain foods can influence our sleep cycle, should you have a snack before bed? Some late-night snacks can help you harness the power of the food coma. While you probably don’t want to eat a large meal before bed, you also don’t necessarily want to go to bed hungry. Eating certain smaller snacks in the hours before bedtime can help your body “hack” your sleep cycle. For instance, eating a small amount of a food that contains tryptophan or melatonin in the pre-bedtime hours can help your body use the power of the food coma for good, telling it to slow down and process the nutrients you’re giving it.

Some foods that are rich in melatonin, which can help regulate the body’s sleep cycle, include:

You should always speak with a doctor if you suspect an underlying health problem might be causing your constant tiredness after eating. However, after eating a large meal or certain foods, it is normal to fall into a “food coma” for a few hours. Postprandial somnolence can be managed by portion control, eating foods high in tryptophan and melatonin mostly at night, and considering the quality of nutrition your meals provide.